2nd cook-in of the season

Yesterday saw the second Cook-in session, this time operations were moved to Pastures Church Community Hall over the road because the weather was windy & threatened rain. The POW group (still don't know what it stands for) were delightful and helpful. First several of them came over to the site to pick produce with the help of lovely big laminated pictures. (Mark liked the smells.) When we got back to hall we sat down to prep the food at 4 tables where everything had been laid out for the 4 dishes : Tuscan bean soup, spring green risotto, mixed salad and fruit kebabs. Some volunteers and members of the group went in the kitchen to get the cooking going. Tipping things in and stirring were popular activities. (Barbara couldn't be dragged away.)
While the two cooked dishes were cooking most of the group stayed in the hall & played a game devised by Nutritionist Jackie using brilliant home made smell holders. (I wd never have guessed that soggy mess was weetabix!)
Then we sat down & had a feed (does this sound like a familiar pattern?)
Those that tried the food enjoyed it - lots. (Kevin had two helpings of everything and Marion really loved the parmesan shavings) Food was got ready to take over the road for Ben who was holding the fort for Sean being assessed on the site, but Ben magically appeared among us. Volunteers and the group and their supervisors all mucked in to clear up and it all went swimmingly. (It really helps having hot water on tap!) It was also good that almost all the equipment came from one source - Jackie.
Thanks to everyone who helped make this a most enjoyable event.
Posted by Mary V at 07:09 No comments: 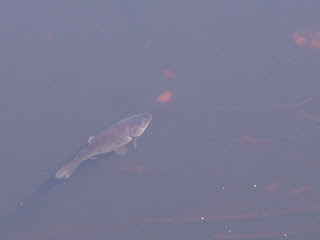 The pond has some mysterious new occupants. At least four small brown fish have been spotted swimming happily amongst the plants and tadpoles. Nobody has the slightest idea where they came from. We can only assume they were put in by another tenant on the site, perhaps because they didn't want them in their own pond, or perhaps as an anonymous gift for all to enjoy. We know that people love to come and sit by our pond and they're very welcome to enjoy it.


We guess the fish must be eating the pond weed because that has cleared almost entirely. Does anyone know what sort of fish they are and how should we feed them?
Posted by ben at 17:05 No comments:

The AGM took place at Montrose court (thanks Kathy for fighting off others who wanted the room!) Lots of people turned up - at least 15. (Councillor Dave Pearson said if Brian had known there w'd be food he w'd have come too) It was a catalogue of achievements and great things happening over the last year, chiefly the increase in volunteers who worked hard to make the project better, publicise it and make events happen, which in turn attracted more volunteers.
Feedback from those assembled gave encouragement and ideas for the future. In particular Sean wd like a strimmer which Ben wd like upgraded to a sit-on mower and Mary wd like a toilet.
And our supporters wd like yet more info & communication and even more requests for help with volunteers and funding. What marvellous people!
Then we had a bit of a feed - Rhubarb muffins, cheese tartlets, cheese and spinach rolls, beetroot brownies and other lovely grub. After all, isn't that why we grow food?
Posted by Mary V at 08:49 1 comment: