The hawthorn tree is in full blossom at the moment, absolutely smothered, and looks fab! 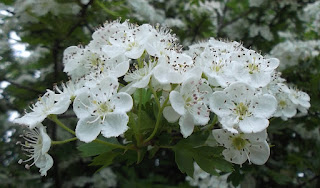 The grass got its third mow of the year today so there's plenty of grass cuttings for the composters to deal with again!

We sowed some runner beans, a little later than we normally would, but this was due to all of the seeds sown a few weeks ago failing.  Lets hope this little lot germinate for us.

We also sowed some wild flower seeds from Grow Wild in our small wildlife area.  The area is doing quite well with at least one of the birdboxes we made being occupied.  We won't be looking to see if the other box has been used until probably October, just in case it could still be used for a second brood.