A bit of a blustery one today at DigIn.  Absolutely LOADS of seed sowing and potting on done today, the polytunnel is bulging at the seams.
It was Angela's birthday too, so we had chocolates as well as the tea & biccies at break time - thanks Angela!

Here's a pic of one of the vine cuttings from when we pruned the vine in January.  Its amazing that a dead-looking twig about 6 inches long when pushed into the ground in January can actually produce flowers in a few short months.  These flowers would go on to become grapes if we let them, but they will need to be removed as the cutting is so small it wouldn't be able to support them. 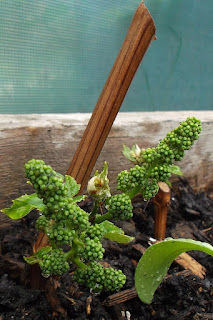 Here's a pic of a newly emerged dragonfly.  It seemed to have fallen into the pond and was struggling, so we moved it to a safe place on the decking for it to dry out & regain some sort of composure.  I think you'll agree, a fine looking specimen to grace our wildlife pond.  I think we'll name it 'Lucky'.  Does anyone know the species? 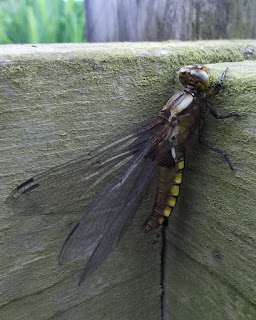