First Cook-in of the season

I don't know precisely how many people came to the first cook-in of the season - about a dozen E2E people with attendant trainee social workers and tutors, then there were volunteers old and new, and various completely new people who Ben tried to sign up as volunteers. Perhaps 30?

Anyway there were heaps of people and the weather was nice for a change. Jackie Henson, NHS nutitionist held the attention of the young people with her 'healthy plate' and 'guess the sugar content' activities. The deck near the pond made a lovely outdoor classroom while the assorted others set up four cooking stations, each with several chopping boards, stoves, knives and other equipment.

I don't know about the others' experience but my young people attacked the veggies with gusto making nice fine slices for stir-frying. Maybe the opportunity to use a cleaver was the draw. One of our visitors, Jas luckily knew how to set up the portable stoves. Apparently he does this sort of thing for a living. The wind got in the way and several of the young folk moved my whole cooking station into the polytunnel, which was much better.

Anyway tons of food was made - Spanish omelette, salad and a sort of rhubarb tiramisu - and devoured. After the YPs had left Gill made a second spanish omelette,we cobbled together a potato salad and we discovered Ben's crop of sprouts which we added to leftover salad and had a grown-up's lunch. All v nice.

Then there was the seemingly endless washing up and sorting.

Basically a good time was had by all and we are eager to do the next one.
Posted by Mary V at 18:19 No comments: 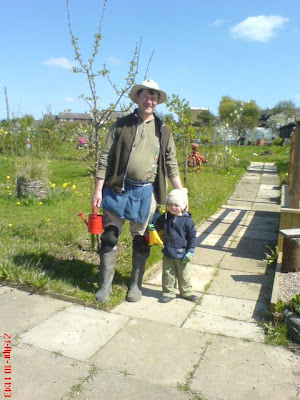 Here is Ben and 'mini Ben' last wednesday.
Such lovely weather, the site is really starting to come to life now, and the seeds we sowed a couple of weeks ago are begining to germinate now too, and it's becoming apparent that I did indeed have the help of my two daughters, as all sorts of intersting mixtures of seed are appearing in some of the pots :$ - oops!
Our 40 mixed sunflower seeds are growing at home now too, and we intend to bring some to the site and brighten up the entrance area, for everyone to enjoy!
We also continued to dig over the beds remove weeds and dig in barrows full of course sand.
I started a new bed for comfrey.
I'm interested in trying harvesting some nettles to make our own fertiliser for later on, waste not want not! However I believe we are now Nettle free, so perhaps a walk of the site and sounding area.
Posted by Three Red Wellies (Nicola) at 03:48 3 comments: 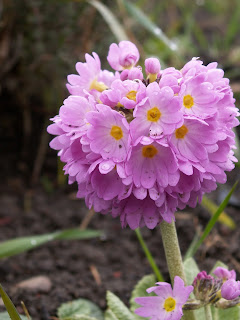 We started our new Saturday sessions in the most beautiful sunny weather.


Linda and Owain came along and did a lot of watering, to counteract the sun's drying effects on the soil. They also weeded out the larger of our onion beds before the early season weeds could take too firm a grip.


Sally, who recently enquired about joining us came along for an introductory look round before she had to go to a prior engagement. We hope to see Sally again, maybe on Wednesday.


Then another set of new folk, a family of four, arrived by bicycle. They arrived in two parent-and-child groups, having struggled to find the site. No wonder: who took down the allotment site notice? Anyway, it wasn't long before Chris, Amy, Abie and Chloe had been whisked around the site on a guided tour, then got stuck into some weeding: this time going to work on the bed of garlic and shallots. They left, all smiles, looking forward to next week. 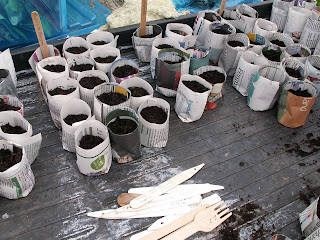 Lots of seeds being sown today. The little paper pots were all made by Kathy using a wooden former, a huge pile of newspaper, and an endless supply of patience. This is cheaper and more environmentally friendly than lots of plastic pots which use lots of oil in their production. If we all use less oil, we might not need our 'leaders' to attack so many gulf oil states. Hey, Dig In builds the road to world peace! When the seedlings grow, we can pop the whole thing into the ground and the paper pot just rots down into the earth and produces less root disturbance (= stronger plants = more lovely veggies.)
Two new visitors today: Owen and Linda came along for the first time to see what we do. They braved a heavy shower of rain as we did the grand tour of the site, and Owen even got his hands dirty with the seed-sowing. They're both lovely people and we're all hoping they'll stay with us and help the project to grow.
So: world peace, lovely veggie, and wonderful people - not a bad day's work.
Posted by ben at 19:01 No comments: 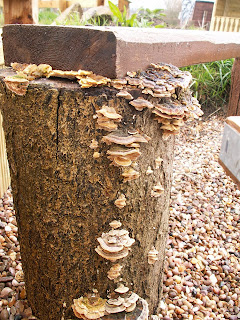 Mary spotted this fungi today and pointed out how lovely it looked. No other reason for blogging this except that 'lovely' is, well, lovely.