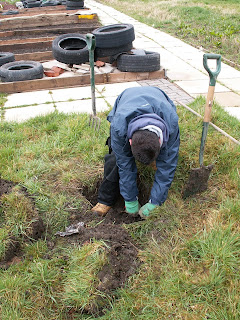 What's Sean doing in that hole?

He's preparing the ground for the replanting of our new jostaberry bush which we'd previously put in the wrong place. A recent visitor to Dig In pointed out that we'd planted it too close to a gooseberry, and that jostaberries need a good deal of space. So Sean ventured out into the drizzle and put some muscle into digging a new hole for the bush. He fortified the soil with a good measure of fertiliser and set the bush in firmly, together with a stout stake for support as it grows bigger.
So what is a jostaberry anyway? Well, it's one of the new 'superfoods' - packed with vitamins and goodness, but don't ask me what it tastes like: at least, don't ask me until later in the year when we've harvested the fruits of Sean's labour.
Posted by ben at 19:22