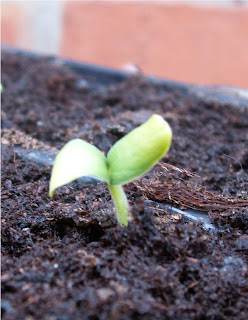 Here's the very first seedling of 2010, just shooting out from the compost. It's a melon, in case you're wondering. It was raised under a simple, inexpensive propagator top from Wilko's, placed on a window ledge in a warm room.

Starting early seeds off indoors is a great way to get a head start on the growing season, even when it's too cold and wet outside to think of sowing anything in the soil. Tender plants, such as melons, peppers, and tomatoes can be germinated (ie. started from seed) in trays of compost in the house, with a propagator top which acts like a tiny wee greenhouse. The propagator top is removed once the first shoots appear.

Once the plants are big enough they are usually 'potted on' - that is, transplanted into larger pots to give the roots more space to spread out. Then you can start 'hardening off' by putting them outdoors in spring for increasingly long periods each day until they're finally able to look after themselves out of doors once there's no more danger of a bad frost.

These melons will eventually go into our polytunnel, rather than outdoors. They need the extra warmth provided by the tunnel's protection even in spring and summer. By starting the melons off nice and early, they have plenty of time to grow. They need to be quite big and be producing fruit in good time for the summer, which is when there will be enough heat and sunlight to ripen the fruits. That way we can dare to grow sweet, juicy melons which are not normally associated with our British weather.