I went up to Cool Temperate at Cossall to pick up the order I failed to get for Dig In before Christmas. It was a bit like being a kiddy in a sweetshop (yes I bought myself a Mulberry tree - I admit it, I'm weak...).


So - anyway the outcome is that we now have 2 different rhubarbs to replace our current geriatric one, 1 blackcurrant and 1 Marjorie's Seedling plum ready to be planted next week, + a jostaberry and a yellow gooseberry which are heeled in, in the soft fruit area, because they came bare-rooted and I was wearing fancy boots that weren't up to a proper planting.

When Marjorie gets going, she could look like this. 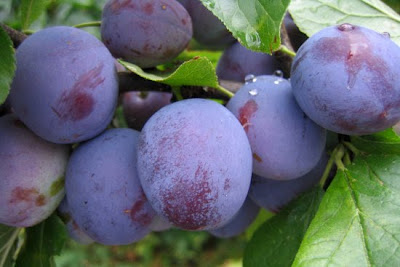 The weather was far too nice and sunny just to drop stuff off and run, so we pottered a bit. My son (Apple man!) got as much of the algae out of the pond as he could with a stick, and I re-wove the fedge and the little willow arbour seat by the ladybird city.
Posted by Tracey at 22:44